I’ve come a long way from a mild Maggie to a lover of all things spice. In my teens my ordering from an Indian restaurant would be a chicken korma but as my love of food has progressed I’ve tested my taste buds to the limit!

I love shaking up recipes and so Friday night saw me incorporate some of KanKun’s best offering of spice into my meal. 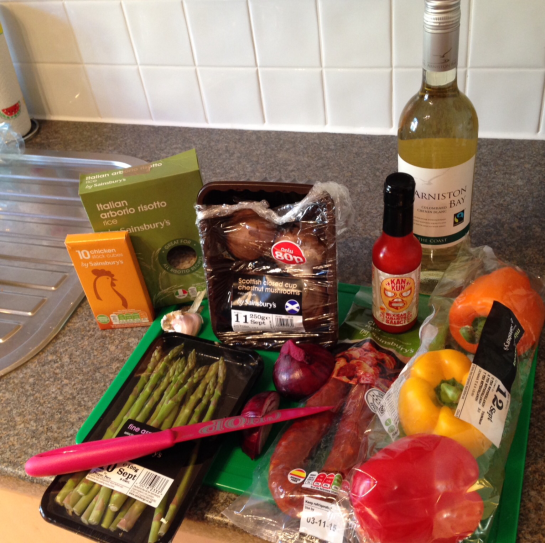 As traditional paellas go, my favourite Spanish offering of chorizo had to make an appearance. As someone who is slowly but surely trying to incorporate seafood into her diet, I had to pass on the traditional seafood fair and opt for cured meat instead. A bit of a mishmash of veggies for nutrition, chunkiness and colour were thrown in. Along with chicken stock, some white wine and for tonight the spiciest of the 3 KanKun sauces, Habanero, classed as an exceptionally hot chilli pepper!

More paprika to add flavour to the paella

In the past I’ve used a lot more arborio rice but by cutting the veggies quite chunky it made for a more filling meal, you can slice and dice whichever which way you fancy, I went for diced onion, long strips on pepper, large dices of mushrooms and sliced up the asparagus quite chunky and finely chopped he clove of garlic. One thing for sure this meal was going to be super flavoursome. 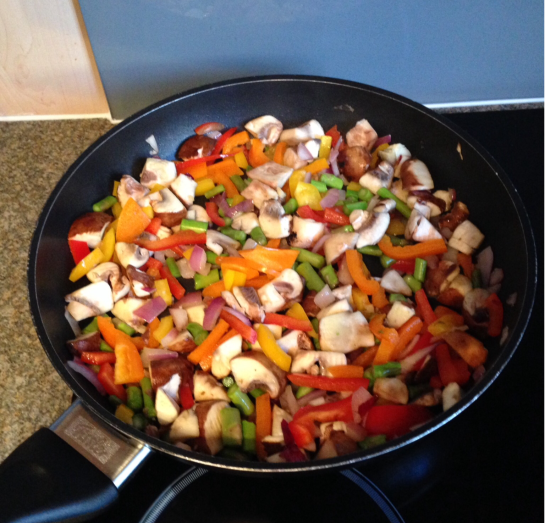 I cooked off the veggies in a small amount of olive oil, a good non-stick pan you can’t go wrong with. I then added the rice and the splash of wine and allowed the alcohol to evaporate before adding a quarter of stock at a time to be absorbed by the rice. You can add all the stock and allow the rice to absorb the liquid, both methods I have used and they work just as well. As soon as the rice has absorbed most of the liquid – there should be some left. Taste the rice it will be fluffy and soft. 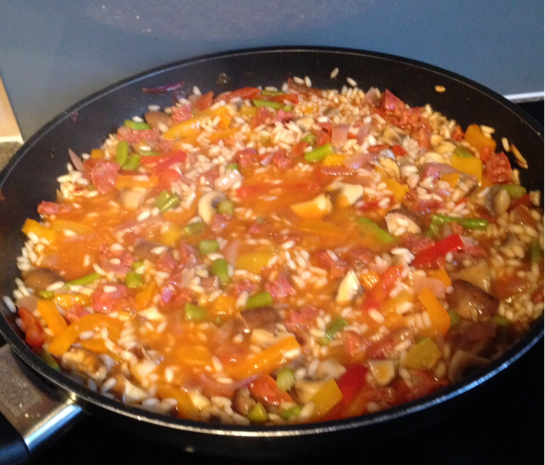 Time to get spicy with it

And so my tastebuds were shocked to the system… Probably one of the spiciest things I’ve placed in my mouth and I’d say we added only a dollop and infused the sauce with the flavours of the stock but there was no watering down. My socks had been well and truly blown off but the reality was I couldn’t get enough of it I had two helpings! All be it I did sit with a glass of milk and had ice cream to cool my palate down afterwards.

There’s a lot of die hard chilli loving friends of mine that I know will love this sauce as an accompaniment to their dinners. If you’re a fan of all things hot, KanKun Habanero will not disappoint and hey even if you’re attempting to try a little more spice on your plate like me, you can handle it! All be it keep the milk handy just in case!

It was Saturday night and the evening before, I marinated 2 rump steaks in KanKun’s Chipotle spicy sauce. This allowed the depth of flavour to develop overnight so as I could enjoy my succulent Saturday steak.

I choose to accompany the steak with a sweetcorn relish (I simply used Green Giant’s new microwaveable pouch which has been sitting in our cupboard for ages) which was made up of 3 blanched then finely diced tomatoes with a squeeze of lime juice and some salt and pepper for seasoning. Blanching (for those who don’t know or do it) is when you boil water in a pan, add the tomatoes for approximately 1 minute then plunge the tomatoes into cold water so as the skins are easily removed.

I sliced some mixed peppers and a white onion gently shallow frying it in a little olive oil to top the steak with. 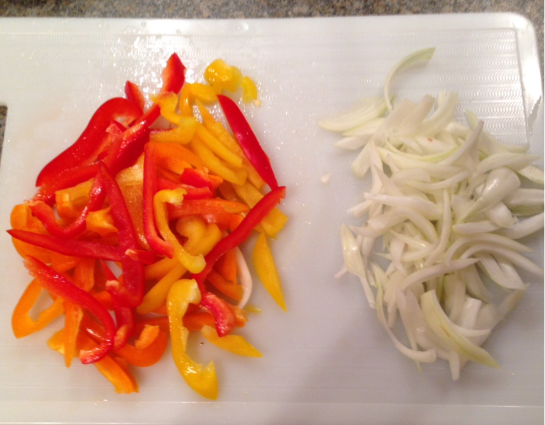 To accompany my steak I sliced white and sweet potatoes for a bit of mix ‘n’ match and shook some smoked paprika on top for flavour before roasting in the oven with some olive oil. 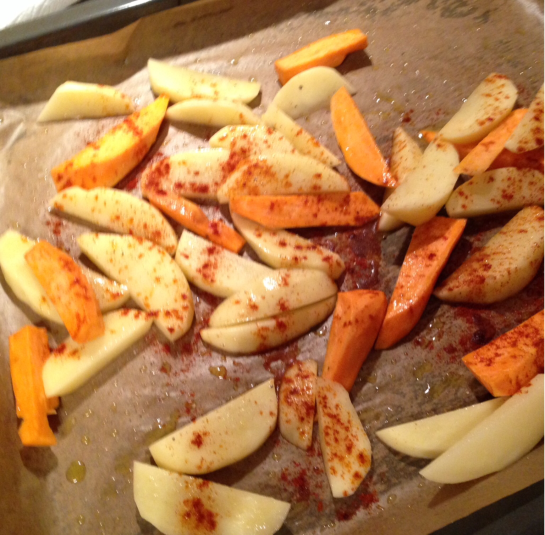 When serving up I added a little more of the chipotle sauce on top of the steak, it’s very versatile as a marinade and an accompaniment for dipping and adding to flavour meals. 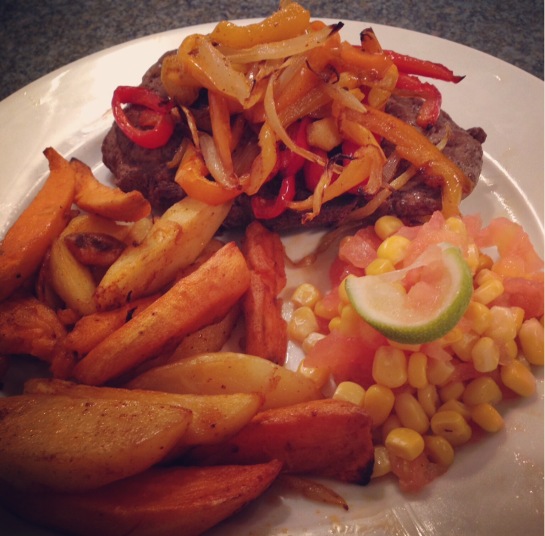 Jalapeño chilli nachos – It had to be for my third and final meal this week with KanKun Sauces.

The great thing about this meal is it can be as easy as you want. I had leftover chilli in the freezer so it was just a matter of defrosting overnight (or in the microwave) tipping it into a pan and adding a smidge more tomato purée if it’s looking a tad dry

Half of a red and orange pepper diced

Simply brown the mince, add a tiny blob of olive oil but if you have a non stick pan it shouldn’t be required.

Once the mince has browned, I normally tip it out the pan and clean any excess fat off with some kitchen roll.

Add the onions and peppers and cook gently until onions are translucent, tip the mince back in.

Cover the mince and veg with the sauce, chopped tomatoes, tomato purée and seasoning, bring to the boil and allow to simmer to reduce any excess liquid so as it’s not too watery. 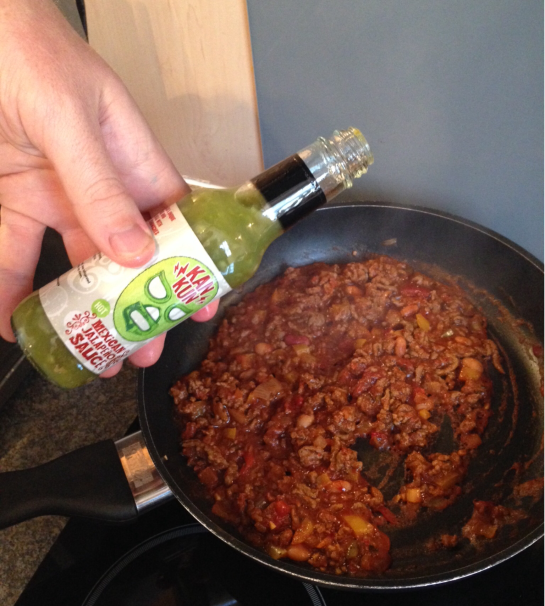 We added some KanKun sauce to the mix

With so much chilli to freeze it’s fab for separating into different tupperware boxes defrosting and serving with nachos, topped on a baked potato, with rice or simply in a pitta with a side salad.
Once the mince mixture was all heated through, I added KanKun’s jalapeño hot sauce to the mix and topped slightly salted tortillas with chilli, making two layers in an oven-proof dish stacked with sour cream, salsa and guacamole.

I had 3 tomatoes left from the previous pack used, instead of blanching this time I just diced finely with a quarter of a large white onion and shallow fried in a pan and added to the layers. The plan was to make homemade guacamole but even after 3 days next to bananas in a brown bag the avocados were too hard 😦 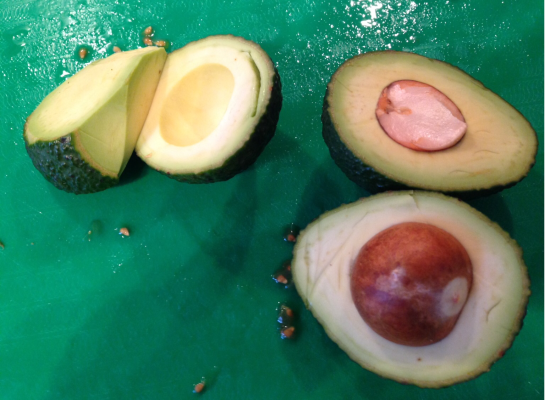 My boyfriend doesn’t like cheese?! If they were just for me I’d have added heaps of cheese to the mix to melt into the chilli jalapeño goodness. As I am a considerate girlfriend I added my cheese afterwards. 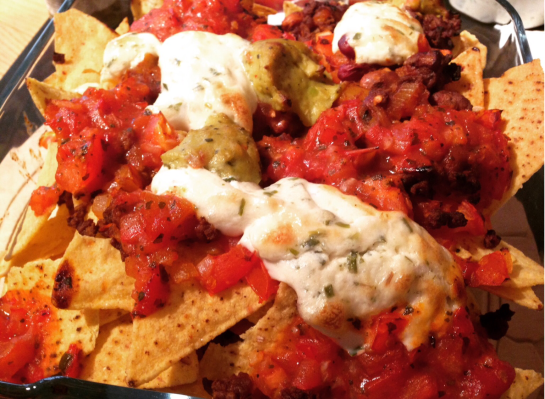 So hopefully that’s inspired you to get cooking with KanKun Sauces or use them as an accompaniment to top off your meals. Some great sauces to add to your condiments collection.

They’re gluten free (great for my mum), no additives, no nuts and vegan! There are also milder versions available so you can work your way up to the hot stuff!

Also check out My Foodie Heaven here they promote speciality foods like KanKun.