Chocolate is the way to a girl’s heart so I rounded up my boyfriend’s sister to join me on a chocolate tour of historic Edinburgh.

We met at Patisserie Valerie on Edinburgh’s most famous back street ‘Rose Street’ which has the most delectable array of sweet treats on display in their window.

Too much to choose from

The tour cost us £12 each via deal website itison.com. The normal cost being £33 via Best Tours website, so it’s definitely worthwhile checking out the many deals websites on offer in Scotland to pick up a bargain.

The tour runs at the weekend only, both Saturday and Sunday at 3pm. Our tour had been cancelled from the week before and so we had the option to reschedule to a date of our choice which was Sunday 20th September 2015. Gail and I were met by Stephanie our guide for the next couple of hours and there was a mum and daughter duo and an American couple from San Francisco. So together there was only 6 of us plus Stephanie. She said she’d been expecting a big group of 10 (the tour can accommodate 20 at a time) however we waited for a while at Patisserie Valerie before moving on to our next stop Hotel Chocolat. Stephanie provided us with a lot of interesting facts about chocolate and the venues we visited. Patisserie Valerie for instance was opened around the time of World War One and the first shop in London was bombed in the war so another was built not long after and it’s still in operation to this day.

Unbeknown to me, there are actually Hotel Chocolats that are actual hotels that you can stay in! We sampled 3 different types of chocolates here, raspberry praline, Eton mess and a honeycomb milk chocolate (which was my personal fave). You can join their chocolate club and they send out lots of different competitions you can enter where you can win a lifestyle supply of chocolate! A perk of the tour was getting a 10% discount that day in every shop on the tour. They have a cute little cafe here too with the most scrumptiously tasty salted caramel hot chocolate to warm your cockles on a chilly afternoon. 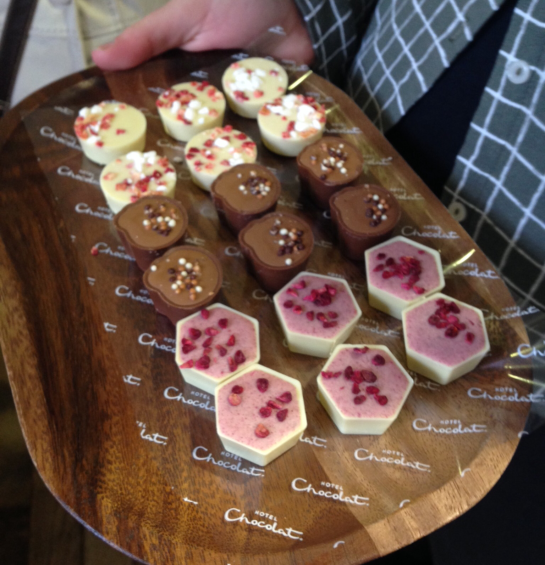 Up next was Bibi’s where we sampled the gooiest of chocolate brownies – it made a nice change from eating chocolates to have something chocolate flavoured and ample in size.

There was a bit of a jaunt to where we could find our next chocolate fix, but that was ok because Edinburgh is beautiful with it’s old historical character but new edge thinking. It felt good to walk off some of the calories consumed 🙂 We made a stop for a group photo and we also found out who was at the top of the tall structure within St Andrew’s square as Stephanie our guide was a bit of a history buff which was a nice added addition as we walked from store to store. It’s Henry Dundas by the way, a politician who helped establish the new town and the structure is the Melville Monument within that area of Edinburgh. 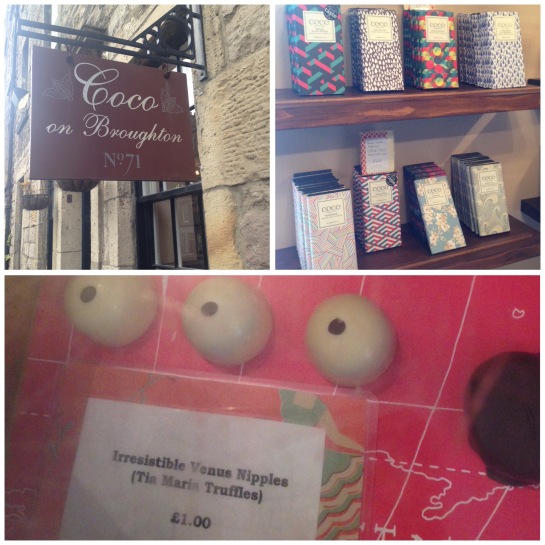 Coco really struck a chord with me, I liked their values, local, mostly gluten free produce, organic, ethical and offering vegan options too. Their chocolate is made in Summerhall in Edinburgh and they offer a chocolate making school experience for £60 and chocolate tasting costing £15 which lasts an hour in their shop (they have two) on Friday evenings. They are known for their Venus Nipples chocolates which, you guessed it, look like nipples! We only got to have one chocolate at Coco, I opted for a chocolate covered fig. The packaging of their products are cute and quirky and would make lovely presents.

Fudge Kitchen on Edinburgh’s Royal Mile was a little treat of a store that I have probably walked by a dozen times but never noticed before, well not any longer, I have a feeling I’m going to be a regular customer from now on. That’s the beauty of doing one of these tours, it introduces you to these little hidden gems you would otherwise miss.

The guys who work here are really friendly and they let you try any fudge you fancy! I tried the mocha flavoured fudge which is melt in the mouth tasty. This wee shop brought back some fond memories for me as I used to work in a candy store when I took part in Walt Disney’s  International college program. We sold fudge in the shop and my friends and I were always cutting up samples of fudge for the guests and us to try 😛

I found out that fudge was actually invented in America at an all female college during a toffee making class which didn’t go to plan. One student allowed the sugar to recrystallise which gives fudge its smooth creamy texture as opposed to the hard exterior of toffee. The name fudge came about as fudge is an exclamation expressed when mistakes have been made as in “oh fudge”! 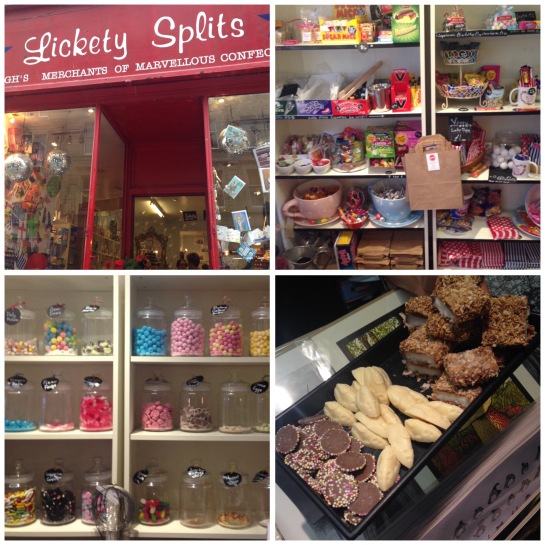 Lickety Splits is the cutest old school sweetie shop. It’s a combination of handmade arts and crafts and traditional sweet treats, there’s bound to be a jar in there that takes you straight back to your childhood.

We were giving a mixture of milk chocolate jazzies (the ones with sprinkles on them), white chocolate mice (the jar I would be heading towards in the shop) and macaroon bars which reminded me of being a child and having teenagers chap on your door trying to sell you a bar to earn them some pocket money.

We got talking to one of the owners and she was so lovely and helpful especially with the American couple who needed some help with directions getting back to their hotel.

A little tipple to finish

Stephanie mentioned that the whisky shop is a relatively new addition to the tour. It’ called Jeffrey St. Whisky and Tobacco right next door to Lickety Splits. The chocolate is basic but the whisky was a nice way to finish especially if you’re a visitor to Edinburgh it was a nice touch. Unfortunately there’s no 10% off in this store much to the whisky lovers disappointment.

So after a good 2 and a half hours sampling the best chocolate goodies in Edinburgh, it was time for a wee glass of wine down the little twigged fairy light tunnel to Monteiths – a dim lit hidden venue that I’ll definitely be coming back to on a date night for some dinner.

What a great day, every girls perfect activity.

One thought on “Edinburgh Chocolate Tour”