Last Wednesday (29th July) I was invited by my good friend House of Herby to an event by We hae meat. Having just moved to Edinburgh I relied on old faithful, Google maps to get me to the location in Leith (somewhere I’ve only been twice in my life). I arrived to partake in a debate regarding the rightful name of one of We hae meat’s most popular products. What I would call square sausage, is known by many names from flat to Lorne sausage. I was not aware of the brand ‘We hae meat’ until tonight. They are indeed a Scottish based family-run, traditional butcher situated in Girvan, Ayrshire whereby quality is their top priority by far. Check them out here for more info.

With us all having declared our opinion on the name for square sausage, we tried some of We hae meat’s offering on a traditional well fired roll. Some reached for the tomato ketchup but it has to be brown sauce every time for me. To me square sausage with brown sauce on a morning roll just reeks Scottishness and family weekend breakfasts. We hae meat are out to do something different though, they want to inspire us to take our trusty square sausage out of the breakfast equation and into lunch or dinner. 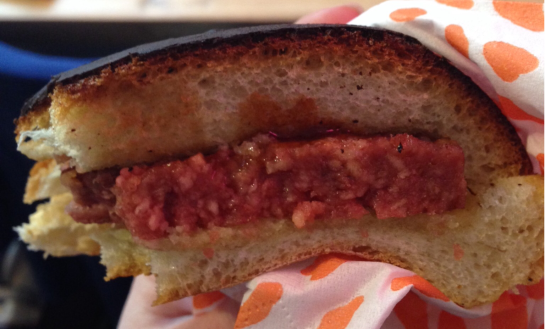 Happiness in a roll

I got to sample We hae meat’s BBQ and chive and onion varieties both of which I would more than happily buy and have on my morning roll. Something I was not expecting however was square sausage meatballs served on a bed of courgetti (the new craze, non-carb spiral courgette alternative to spaghetti – you can make your own using a spiralizer). The square sausage meatballs were bursting with flavour, they were so good I had a second helping! 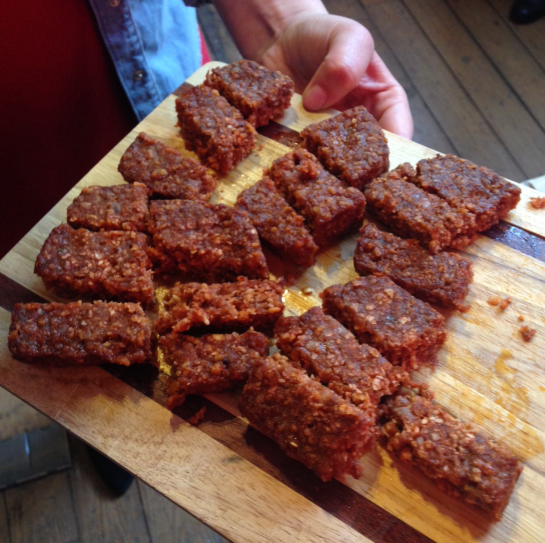 To take things further, We hae meat offered up their tasty steak slice sausage within a soft taco surrounded by salsa and avocado. My mind was telling me no but my tastebuds were telling me yes! I would urge everyone to give it a try, push the boundaries of square sausage beyond the breakfast table. 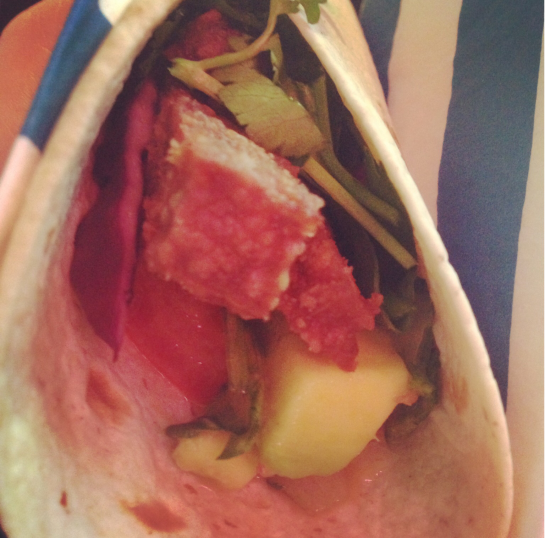 My mind had been broadened and with my love of cooking I had to experiment with Wae hae meat’s steak slice, so I did……

A different way to eat your sausage and eggs.

Moroccan meatballs with eggs. So this recipe was inspired by a recipe I found on BBC Good Food’s website. They suggest lamb which is a popular meat used in Moroccan cooking but with my pack of We hae meat’s steak slice sausage at the ready I was going to try something different. 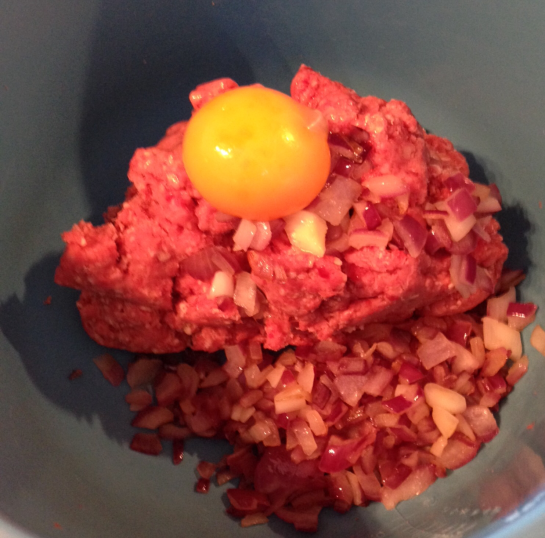 4. Brown the meatballs in the remaining oil (add more oil if need-be) in a shallow pan for approx 8 mins, moving them round with a wooden spoon until evenly browned. Lift out and set aside on paper towels on a clean plate. (Don’t worry if the meatballs are still a little pink, they will cook further when cooking in the juices of the chopped tomatoes).

5. Finely chop the garlic add it to the oil left in the pan (add a little more if need be) and fry gently until softened. Slice the courgette into thick chunky slices add it to the pan, cook for 1-2 mins, then tip in the tomatoes, honey, ras el hanout, three-quarters of the coriander, season to taste. Stir, bring to the boil and simmer until thickened. (I found that the dish wasn’t very spicy but still scrumptiously tasty so adjust ras el hanout to your spice liking).

6. Drain the liquid from the chickpeas. Stir in the chickpeas and add the meatballs to the pan. Make  2 – 4 hollows in the sauce (depending on how many eggs you want) then break in the eggs. Cover and cook for 4-8 mins over a low heat until the eggs are set.  Dish up as many portions as required, garnish with fresh coriander.

– My pan doesn’t have a lid so I just covered the pan with some tin foil for a few minutes to allow the eggs to set.

– Delicious dish on its own or serve with your favourite bread (I had a plain naan bread to dip in with my helping). Brown rice or roasted / baked potatoes could be a good option too.

2 thoughts on “We hae meat”